Three flowering black eggplants in pots in the back yard.

It was pretty hot (above 90) yesterday, and the temperatures are predicted to rise for the next two days. I’ve been watering both the front and back garden every day for three days now, and Chris and I are just about to go water it again today. Things are really going to take off I think!

We have a yellow summer squash growing in the zucchini plants – the seeds must have been mixed up when they were packaged! The tomatoes are finally just starting to turn red – there is one Amana Orange that’s just about ripe with Blossom End Rot (boo-hiss), but here’s a rather large tomato that looks like it’s going to avoid the rot:

It’s one of the heirlooms – Amana Orange, Oxacan Pink, or Marvel Striped – but we won’t know which one until it ripens! Next year I plan to keep the tomatoes labeled better, and maybe even plant the varieties together so we can judge the plants for seed-saving purposes (what an idea!).

There’s also a large slicing-cucumber, and a few pickling ones. I hope the pickling cukes take off soon, because we haven’t really had enough to make a batch of pickles yet. Sure, I pull two or three every couple of days but it isn’t enough to fill up a pint jar!

The chile peppers are loaded this year – last year we didn’t have much luck with chiles, getting only one or two peppers from each plant. I’ve been using the czechoslovokian black peppers pretty regularly – each plant has at least 15 chiles on it! The cayennes are loaded with long green peppers – I can’t wait for them to ripen! We should be able to dry a bunch of peppers and also make some chile sauce. 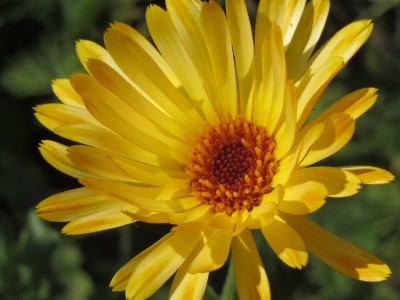