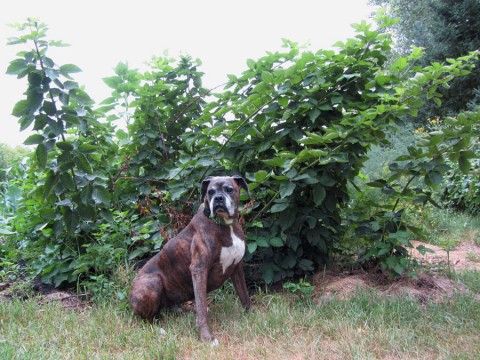 Poor Puck. He’s constantly being forced to come, stop, sit, stay in the garden so I can take his picture next to something I’m growing. He doesn’t seem to mind too much, but some days (like this one) he gets a bit tired of the constant photography games.

Here he is sitting in front of our blackberry “bush,” which is likely going to take over the entire garden one day. A friend helped me put these in two summers ago, and we still haven’t seen fruit from them. They *are* Zone 4 (which we are), and are supposed to produce fruits on new canes. (Some berries only produce fruits on year-old canes, and blackberries in particular don’t often survive a hard winter freeze).

I’m not entirely sure if the lack of fruit is due to lack of flowers…or if we have a bird problem. You see, a couple of weeks ago we had a ton of green and light pink raspberries in the raspberry bushes, and they mysteriously disappeared before we could pick them.

We do also have this dog who has a sweet tooth, and knows how to help himself to fruit in the garden. I watched him polish off my strawberries earlier this spring, so perhaps the “bird” problem is not birds at all… 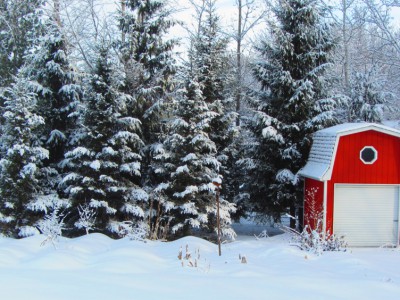 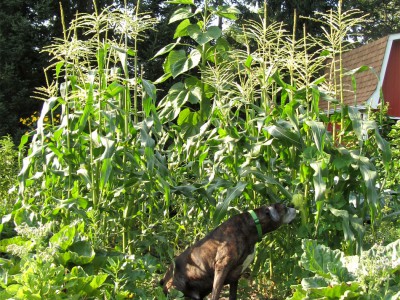 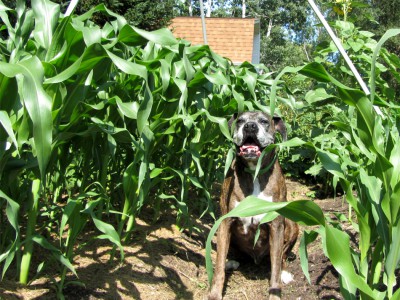